Roll Out What You Need,
When You Need It

Your cabinets weren’t built
with you in mind.

Cabinets are designed with hard-to-reach spaces.

How often do you dread cooking because you know you will need to dig through your cabinets to find what you need?

What if you could get exactly what you need when you need it easily—everything in its place?

Upgrade every inch of your cabinets into functional space with our custom pull out shelf solutions.

Create convenience and order with
every cabinet in your Shingle Springs home.

We’ll measure your cabinets
and provide a custom bid.

We’ll Install Your
Roll Out Shelves.

Proudly show off the inside of your cabinets. It’s all organized!

Enjoy convenience
in every cabinet.

No more bending, digging, snooping to find what you need!

Schedule a Design Session
SCHEDULE A DESIGN SESSION
Call 916-331-4991
Call 916-331-4991
“All organized is the people to call and purchase your rollout shelves. We called and Paul came to our home, explained everything about the shelves, and priced them out for us. He set up an install date and sent out Miguel, his installer, the nicest and neatest worker to work in our home ever. I will recommend ALL ORGANIZED any time we are asked about rollouts.“

Functionality gives you more time to do what you love.

When everything you need is at arm’s reach, you’ll never be far from what matters most. For over 25 years, we’ve helped homeowners in the Shingle Springs area upgrade their cabinets with various slide out and pull out shelves.

We love adding functionality to homes because it means:

We choose the highest quality to design your custom Roll Out Shelves.

For the strongest joint, our craftsman dovetails every connection point.

Easily slide your Roll Out Shelves in and out with our durable hardware.

Subscribe to receive a bundle and save discount code to your inbox! You’ll get:

Pull Out Shelf Options We Offer In Shingle Springs, CA

Every cabinet is different, let’s make the most of every inch. 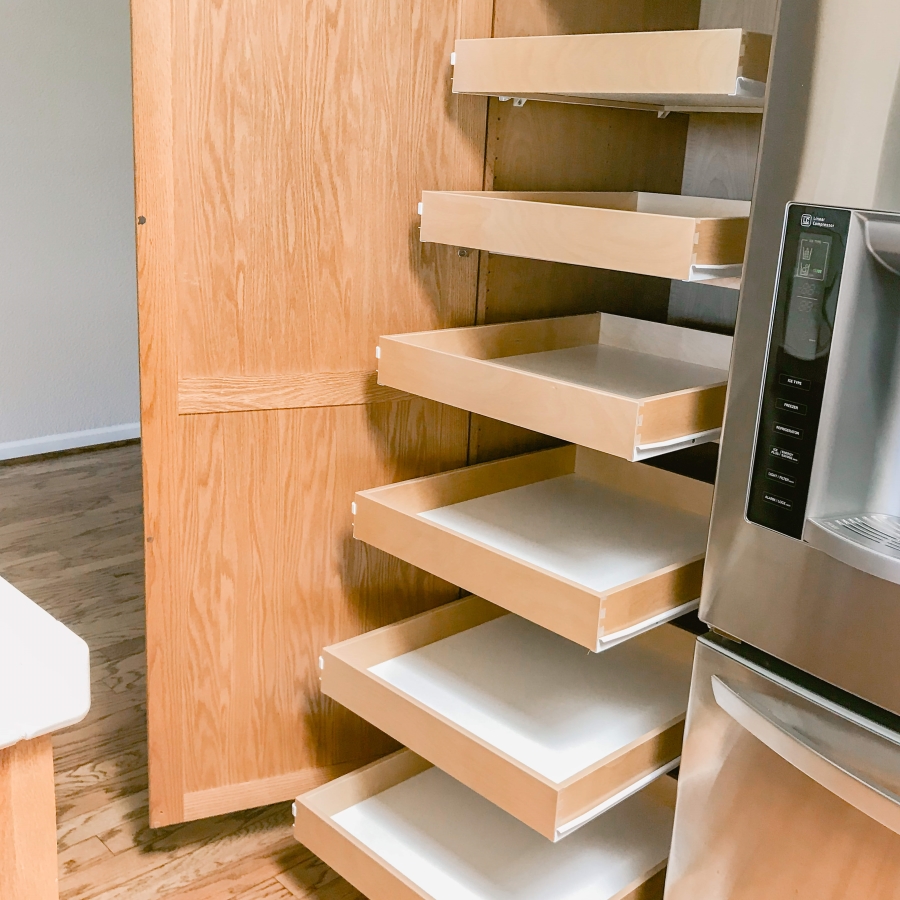 With one glance, you’ll know what to order for a recipe.

Under Sink with Caddy

Caddy shelves allow you to use the valuable space around the pipes.

No more digging in the back of a cabinet, Roll Out what you need. 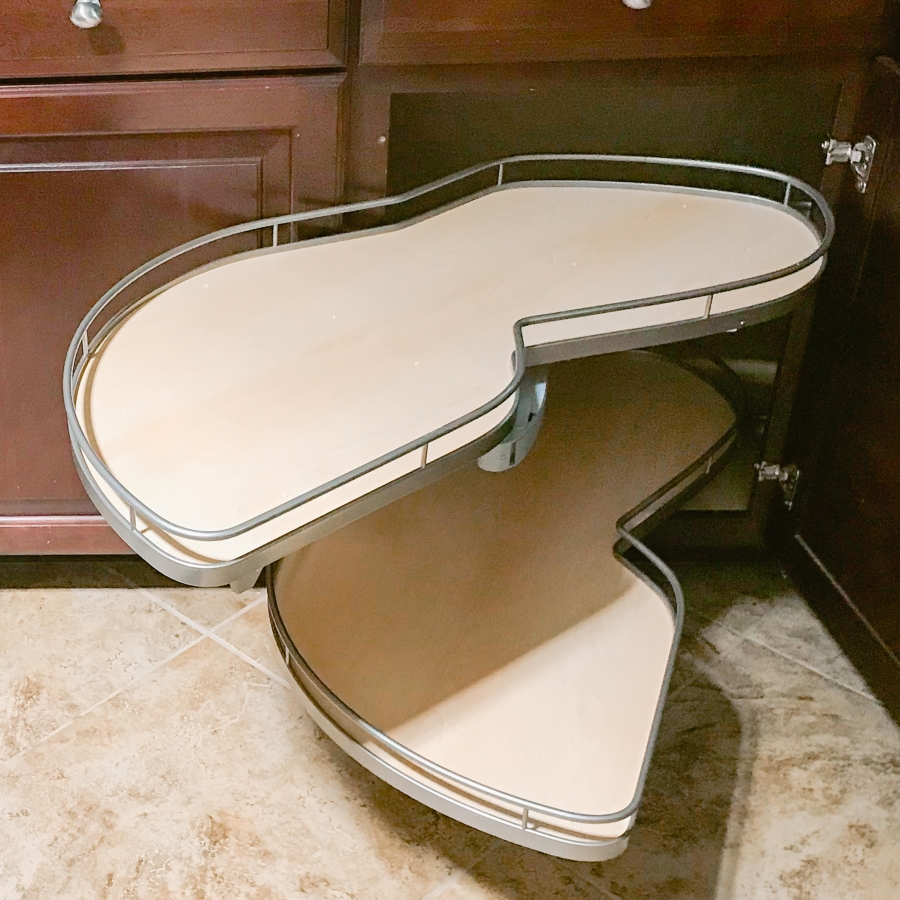 Even your corner cabinets will function as valuable storage again.

Questions About Our Cabinet Shelving Systems in Shingle Springs?

We’re always happy to answer questions for you!

Are there any guarantees?

We know everyone is human, so here’s our guarantee in plain English:

If you overload, overstress, or misuse your pull out shelves and they break – that’s on you! If you use the pull out shelves in the way they’re designed and there is a problem with them – we got your back! See our product warranty description here!

What is All Organized?

All Organized is family-owned and operated by Chris & Paul Upton.  They have been in business since 1975.  They have been manufacturing and installing various pull-out shelving systems for cabinets in the Greater Sacramento area for over 25 years.  They have thousands of satisfied customers.

How long does the process take?

Our in-home design appointment usually takes about 45 min to 1 hour.

Once you place an order, we schedule your installation day & time. Usually about 3-4 weeks from the time you order we are back to install.

Installing pull-out shelves and other sliding shelf storage options usually takes 1 ½ – 4 hours depending on the number of shelves you order.  Sometimes for larger jobs, it can take up to 6 hours.  We are usually done within one day.

What if I like the pain of crawling into my cabinets?

Well, believe it or not…this is the one thing we don’t have a great answer for.

If you enjoy hearing the sweet sounds of cracking knees, the pain-filled cries, and the resounding groans as you bend and stoop day after day to grab what you need then we simply salute you and wish you the best of luck.

If you’re ready to schedule a FREE in-home design session with our team and you will be one step closer to feeling like you’ve got a kitchen you love!

What are Roll Out Shelves made of?

Our shelf sides are made with the highest quality nine-ply Baltic Birch with a UV finish that is scratch-resistant and easy to clean.

The bottoms are melamine which is moisture and scratch-resistant, they won’t warp or sag.

The standard drawer guides are ¾ extension and will hold up to 100 lbs.   The ¾ extension guides extend out of the opening except for about 5.5” and still allows you to reach anything at the back of the shelf.

Our Full Extension drawer guides also hold 100 lbs. and will extend all the way out of the opening.

Do you have a do-it-yourself pull out shelf option?

Yes!  Our roll out and sliding shelf options are easy to install onto an existing shelf with just 4 screws.  You receive a fully assembled Roll Out Shelf with installation instructions and hardware.  We can ship them to your home, or you can pick them up from us in North Highlands.

The DIY option is $10 less per Standard Roll Out Shelf.

What areas do you serve?

We are located in the North Highlands area just north of McClellan. We can ship our products all over the US right to your door.

If you are local to the Greater Sacramento area, you can also pick them up from us or talk to us about installation options.

We service the Greater Sacramento area and Northern California including:

Why are sliding shelves a good fit for my Shingle Springs home?

Are you tired of working in a messy, cluttered kitchen?

I mean, it’s like cooking in a jungle! It can be an adventure just to try and find your saucepan in the far back corner of a kitchen cabinet.

Thankfully, All Organized can help. We make roll-out shelves that help you maximize your cabinet space and get your kitchen under control again.

Then you can love hosting and cooking in your beautiful, organized kitchen!

If you live in Shingle Springs, you already know of the local beauty, history, and attractions:

Shingle Springs is a little community in El Dorado County, California. It is about 40 miles from Sacramento and sits directly on Highway 50, right in the midst of the Gold Country foothills.

Similar to the story of so many California towns, the Shingle Springs community began as a mining settlement. It took its name from a horse-drawn machine capable of producing 16,000 shingles in a day, that was located near a spring on the western edge of the camp.

The original Shingle Springs pioneers preserved a rich store of written records that portray a detailed picture of the Gold Rush. As a result, Shingle Springs is now designated as California National Landmark #456.

Today, the Shingle Springs Band of Miwok Indians, a federally recognized Indian tribe, is headquartered in Shingle Springs. The modern community covers about 8 square miles of land and is home to well over 4,000 people.

Interested in moving to Shingle Springs? Niche.com describes it this way:

If you want to get the kitchen in your Shingle Springs home organized, give us a call!

Other customers are saying:

“This is the second time we’ve had their services. They came to install roll out shelves in our first home. We were so pleased with the convenience at our first and their professional service we hired them again. SO glad they were still in business!” -Judith Miles

“They came for a bid and once it was complete and I said let’s do it, within two weeks we’re back to install. Pricing was reasonable and the quality is superior. I even had them build in a cabinet that holds two trash cans hide. Behind a cabinet for the same cost as if you bought a nice stainless single can. The two best parts are that is has soft close mechanism so my dog can’t get I to it and nobody sees my trash anywhere because it looks like a cabinet. I would highly recommend them to anyone in need. Local personal service is fantastic.” -Tammi Storey

“Appreciated the care and professionalism of the team at All Organized, made our kitchen much more functional and efficient. Thank you.” -Anna Alter

We serve all zip codes in Shingle Springs, CA:

We look forward to hearing from you!

Not sure which roll out shelf is right for your home?

Download and read our FREE guide on our top 5 shelving options!